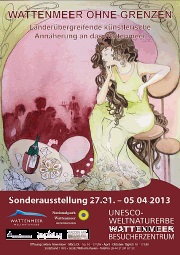 The exhibition "Wadden Sea without frontiers" will be presented at the Wattenmeerhaus in Wilhelmshaven, starting on 27 January 2013. Dutch artists and German art students performed during an international art project their artworks which show the artistical approach to culture and nature heritage of the Wadden Sea Region.

The international art cooperation is based on two projects: 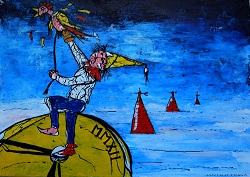 Picture by Jan Huttinga
1. During the project „Hardtslag“ of Stichting WaddenArt Dutch artists worked on cultural identity. Entrepreneurs from the Wadden Sea Region were interviewed by young people and the artists performed their works in relation to the outcome of the interviews. It reflects actual proceedings of the Groningen Region. The main topic is the wholeheartedly engagement to the culture of the region as well as the increasing migration of younger generations into the big cities and abroad.

Picture "Schimmelreiter" driftwood head by Denise Huber
2. Art students from Paderborn worked on artistical approaches of nature and cultural heritage of the Wadden Sea Region, led by Dr. Nina Hinrichs in a special seminar. They produced paintings, statues, photo and installation art. The source of their inspiration have been the unique nature of the Wadden Sea as well as the culture of the Region. Novels like "Schimmelreiter" by Theodor Storm, the beauty of the tidelands, chances and risks of tourism, the flora and fauna as well as "to have a cup of tea" are visualised. The variety and richness of the Wadden Sea Region will be shown in these wide range issues. 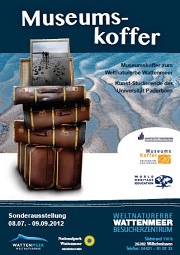 Art students of the University of Paderborn created suitcases pertaining to the subject “Wadden Sea”. These “suitcase-museums” can be seen in an exhibition at the “Wattenmeerhaus Wilhelmshaven” from July 9th until September 9th 2012. The opening will be on Sunday, July 8th 2012 at 5 pm. The suitcases show different aesthetic approaches to the Wadden Sea Region that reflect legends, art, nature protection, critical topics and its status as a UNESCO World Heritage Site.

Prof. Dr. Ströter-Bender initiated the concept of the “suitcase-museum” at the University of Paderborn in 2002. Within the last ten years successful exhibitions were carried out at different World Heritage Sites. The project “Wadden Sea” was initiated and managed by Dr. Nina Hinrichs. Due to the engagement of Dr. Juliane Köhler, director of “Wattenmeerhaus Wilhelmshaven”, the exhibition was made possible.